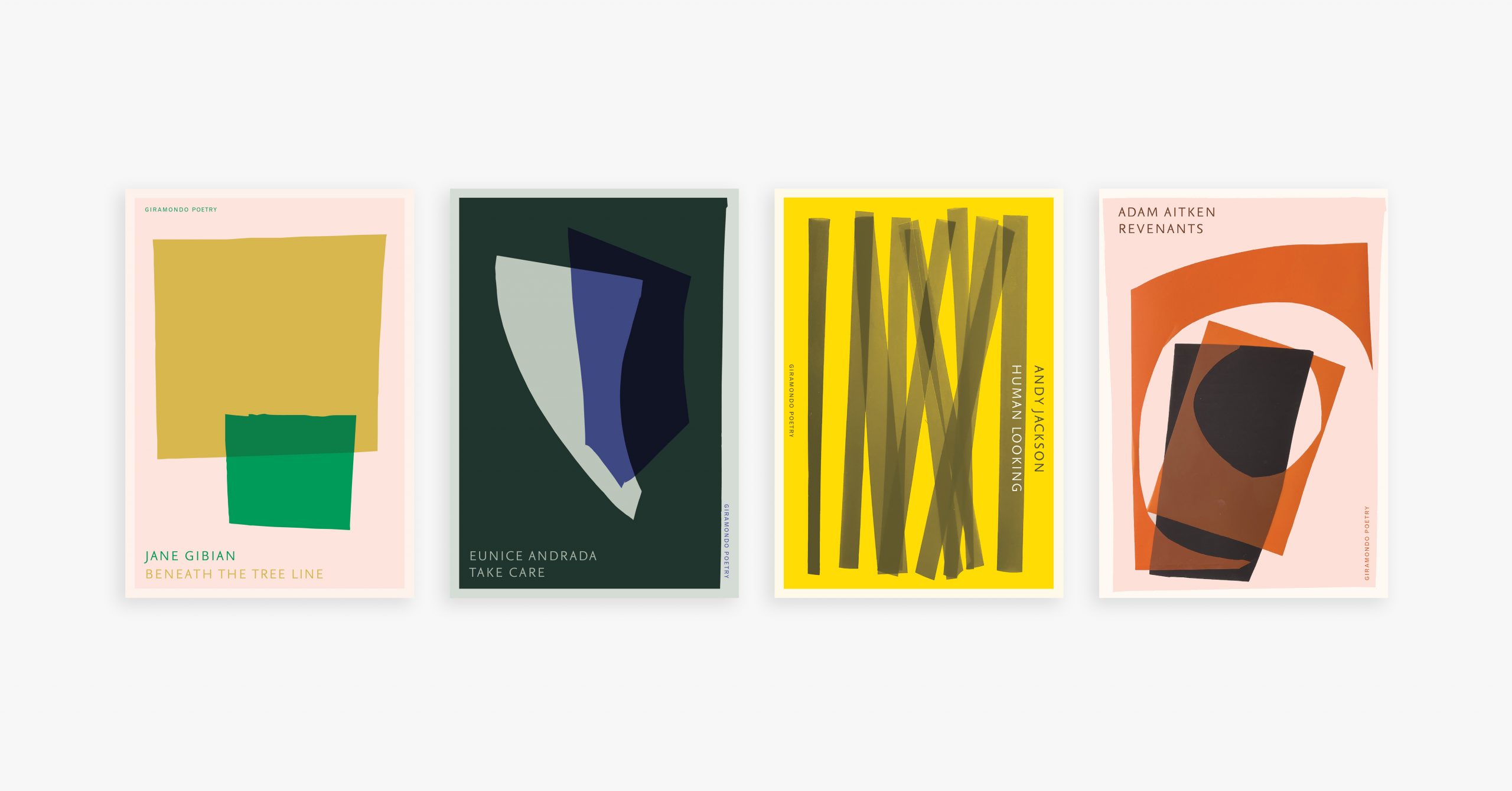 Poetry collections have always been an important part of Giramondo’s publishing output. They have a relatively small readership, but for this reason they lend themselves to special treatment, whether in terms of the poets featured, or the design of the collections themselves. Knowing how skilled Jenny Grigg is in the use of shapes and colours, I asked her to design the covers of our new poetry collections in a way which would draw attention to the individual titles, while at the same time reinforcing their collective identity, as elements in a distinguished series. The use of abstract designs would lessen our dependence on pictorial images and, hopefully, bring poetry to the attention of a larger circle of readers.

Jenny Grigg on the design process

The poetry covers in the new series were configured by maneuvering coloured plastic shapes across the surface of an unprinted book dummy by hand as I watched for the appearance of concepts suggested in the poems, in the intersecting, coloured, translucent shapes. I prefer to work with immediately responsive analogue techniques to avoid cognitive interference caused by operating computers while designing.

I originally used this method to initiate a series of designs for Peter Carey in 2001. Much like rapid prototyping except the prototypes are actually published – the results from the process are distributed across the books in a given suite to give them coherence as a body of writing.

In this process, photographs record potential scenes as they appear, and the designs resolve when visual, material and verbal meanings interrelate. For example, the design for Andy Jackson’s Human Looking began as a series of strips because strips were quick to cut, and their abstract shapes raw material for meaning. Laid vertically like people, when these were shifted about, they performed as a kind of language themselves. This abstract approach fitted Jackson’s intention ‘to disrupt assumptions around visibility’, and solved the problem of trying to find a suitable visual to illustrate this point, suggesting ‘difference among normality’ while at the same time, as the author noted, the strips could be seen as ‘hinting at poetic lines’.

Design researcher Johanna Drucker defines this kind of translation as a form of visual knowledge production; a process that simultaneously interprets visualisations and visualises interpretations. Whilst designing, I seek to decipher meanings in abstract visual configurations in response to the literary work, as well as to determine how abstract an image can be and retain meaning for others. Book publisher Roberto Calasso referred to the book cover design process as ‘reverse ekphrasis’. Rather than using words to describe an image, images are authored to reflect the meaning of words.

In other words, the covers represent a series of visual as well as material metaphors. A dark underlying shape suggests ‘the past affecting the present’, a theme of Adam Aitken’s collection Revenants. The intersection between a blue and light shape conveys thoughtfulness between two women as one offers the other refuge, a scene from Eunice Andrada’s poem ‘Take Care’; and two overlaid rectangular shapes combine to suggest the shape of a tree and the concept of ‘beneath’, for Gibian’s collection Beneath the Tree Line. The material’s translucency is pivotal in the conveyance of these meanings.

An underlying interest of these works is the intersection of visual and verbal communication, and how these inform new interpretations and correspondences. Given that book cover design is embedded in marketing, and designs are often commissioned to interpret the wishes of predetermined markets, in these designs, by contrast, literature leads, the publisher briefs the designer to respond to the concerns of the writer, and the market has its opportunity to react after publication.

The first two poetry collections in our new-look poetry series, Beneath the Tree Line by Jane Gibian and TAKE CARE by Eunice Andrada, are in stock now and Human Looking by Andy Jackson is available for pre-order ahead of its October release.

Readers can also receive our poetry collections as soon as they are printed, and at a substantial discount, by subscribing to our subscription service.