T.G.H Strehlow had grown up with Aboriginal children on the mission, and his knowledge of Arrernte customs was unique. His descriptions of the landscape and its stories, the places of death, the outposts of white settlement; the Biblical resonances of his father’s sufferings, as he is carried towards his end, his swollen body mounted on a huge chair on the back of a horse-drawn cart – all these elements combine to give the work an epic grandeur. 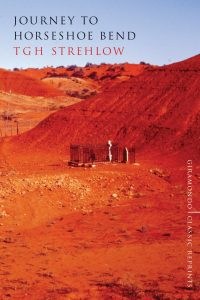 On 10 October 1922 a party left Hermannsburg Mission, west of Alice Springs, to make the perilous journey along the dry bed of the Finke River, in the heat of summer, to the settlement at Horseshoe Bend, in a desperate attempt to save the life of the mission’s pastor, Carl Strehlow. The story is told by his son, who was fourteen years old when he accompanied his father on the journey, and was marked by it for life.