There is a need to state the opposite.

If he had lived, Martin Johnston would be one of Australia’s more familiar poets, occupying our imagination and contributing to our sense of cultural identity, albeit at a slightly askance angle: his death in 1990 at the age of forty-two from alcoholism was, as Martin Duwell noted, ‘a painful blow to Australian writing’ which deprived the canon of a full range of his erudite and challenging poems.

Johnston published four collections – Shadowmass (1971), Ithaka: Modern Greek Poetry in Translation (1973), The Sea-Cucumber (1978) and The Typewriter Considered as a Bee-Trap (1984). His last collection was published by Hale & Iremonger in its great mid-eighties flowering as the promoter of the new generation of contemporary Australian poets.

My poem ‘Microgeography’ talks directly to Johnston’s own life, and particularly to his long poem ‘Microclimatology’, from The Sea-Cucumber, in that it seeks to convey the sense of personal surrealism that comes from being a contemporary writer (establishing a literary reputation, being part of the canon) on the one hand, and on the other, struggling with social and economic realities often compounded by having to work in shitty, low-paid jobs. Both poems offer a detailed examination of an intimate physical world marred by political and fiscal intrusions (Johnston lived in Greece prior to and after the Colonels’ military rule; in 2003 I received an unexpected tax debt thanks to a literary grant that didn’t factor in HECS repayments).

Though personal, both poems allude to pressing social concerns (underemployment, burgeoning personal and national debt, the rise of fundamentalism, the dumbing down of culture, the relevance of art, the war on history, terror), and express a political awareness that is often absent from the poetry of new and emerging contemporary poets. This is why Johnston should be read and reread by younger poets. He wrote lyrical poetry from a Greek or European tradition rather than from a UK-US inspired practice, poetry which was both aesthetically pleasing and offered a political and intellectual challenge for the reader.

Johnston’s poetry draws on Western art, philosophy, literature, history, politics and mythology, and champions a universal intellectualism and wit in contrast to the less taxing trend amongst younger Australian poets, whose anxiety of influence forces them to imitate, borrow or adapt a largely mainstream, middle-class, non-political, individualistic, US cultural and literary sensibility for their aesthetic discourse. Whether it is slam poetry, rap, spoken word, flash animated or capital “P” lyric poetry for the literary pages, this trend seriously bankrupts the artistic integrity of many new poets in this country.

When the political counterpoints have all been sanitised, what relevance does this watered-down poetry achieve? As Johnston put it in his poem ‘Gradus Ad Parnassum’, ‘And the groovier modern Americans? They seem to be the context/ I’m supposed to work in, though I mostly haven’t read them.’ In his work there is the powerful reminder of the literary, intellectual and allusive heights that a poem can ascend to, of how resistance to political and aesthetic neutrality is central to developing the poetry canon, and of how the shape of ideas is as critical to a poem’s performance as its form. Johnston came to our vernacular at anoblique angle, was conscious that the concept of the Australian ‘landscape’ was problematic for him, yet he inspired those around him with his cerebral and witty oeuvre.

1 Your Taxable Income
On the night he was assassinated by the ATO
his ‘taxable professional income not allowable’
the Colonels’ mentality sheathed a garbage bag
over his negativity bin; nowhere on the drop menu
for poet, only process worker, his income derived
from lifting with the vernacular, not against it.
Don’t use your head as a lever bend your mind.
3000 writers die each year from language related
accidents! In a cold room somewhere, a shy man
who wrote quirky sonnets lies dead, snap frozen
under 800kgs of mayonnaise. On his form, pallet-
jack not poet either, the results the same; confined
to literature’s ether. It took a weekend to thaw
his opus, when his notice of assessment came.

2 Tax on Taxable Income
By now his paragraph’s been sorted, wrapped
under a green tarpaulin & sent off to China
Many people on the train (maybe he took one
himself & read of other unfortunate writers)
studied his short story, half an elegy really.
There was opposition here too; commuters
disturbed by gravity & those by chill factors.
On that morning there was a clear division
of expectancy. Workers who would throw
themselves out of a burning building & those
employees who would perish in the flames;
carpet fibres melding new corporate bodies.
His solo effort, less spectacular, took much
longer to discover. The mayo tossed.

3 Medicare Levy
Something he didn’t have to consider often
living there on Hydra in the fifties & sixties,
stressed out with Homer, nursing his contribution
to literature like Aphrodite tending her cut wrist,
sulking in the seventies, Diomedes’ sword blade
a reality he & she couldn’t endure. So…human.
Zeus & the other gods just laughed at her. Apollo
was up next; Diomedes’ would’ve had him too…
if the system had worked properly. However,
the cutbacks started to impact, Aphrodite
frowned at the after hours fee. Fewer & fewer
soothsayers bulk billed. Why else would Achilles
sit it out for so long & risk his dicky tendon?
No private cover, his tax was rounded down.

4 Your HECS repayment
Again, this is beyond his realm; a Phaistos Disc
of user pays society, part pictogram, all Australian.
We now know why the Minoans failed. Not earthquake,
not drought, not Dorian invasion. Their kingdom
collapsed from those childless renters, very educated
but fiscally challenged. The housing slump number
crunched no first home buyers, no baby bonuses.
Immigration was out unless you were Phoenician:
Knossos’ population aged took a voluntary package.
Borrowed heavily to get through a classic dark era.
In a cultural cringe Minos resorted to Athenian
imports, band-aid measures, his education policies
labyrinthine. It all ended in a banana republic;
the ‘world’s greatest treasurer’, half man half bull.

5 PAYG Withholding Credits
The first attempt failed so they sent another assassin.
‘Parasites After Your Gonads’ instalments; piano wire
for poets, not quite a delivery boy sent by grocery clerks
this business of words so profitable? He was a special
professional too – this tax regime made the Colonels’
red tape look pinkish & delicate, so they threw a few
of them onto island prisons…so Papillon but without
the butterfly tattoo. Isn’t Australia is the world’s largest
island? Settled as a prison though. The sediment says so.
Microgeography. The cultural proximity of this land to
his foster fatherland Greece. How many heads on the
hydra & how to do them? What we miss; his odyssean
intellect, his best-selling books of poems, the cluttered
landscape of his mind, so poetically cyclopean.

6 Tax Offsets and Other Credits
His offsets were the most terrible. Mother dead from
leap of literary faith, father dead the following year, bottle-
friends’ the harshest critics to contend with. Then, sister
gone in as many revolutions of the sun; what could poetry
offer the survivors? Say, the Andes 13th October 1972,
pale witch of the lonely American wind downed soccer
team’s youthful enthusiasm. Even at our worst there are
still rules to follow; don’t eat women. Another totalitarian
microcosm like tax offsets; the benefit of cannibalism
hidden in the gene pool – Pacific nations scapegoated
by colonial recidivists, Batavia’s dinner menu? Pitcairn’s
incestuous end? All poets are endo-cannibals, they eat
other poets’ words out of respect; otherwise vampires
we assume, tax advisors bloodsucking the living dead.

7 Balance of the Assessment
The balance of our cultural assessment is not
in his favour. Half Greek, half Australian, quasi-
inner urban intellectual? As a kid, he knew how
to identify trees, not climb them. The one thing
he lacked as a writer: our sporting affliction? He
was outside the vernacular, yet at school hated
Turks too. A mythical doppelganger, Gallipoli
true? Family osmosis denounced his academia.
Which blue was realer? Corfu? Sydney Harbour?
Australian literature, like the stegosaurus has two
artistic brains, one lodged in its UK nugget & one
stuck in its US arse-end, the ‘tense’ object of poetry
a beautiful but useless game, in the running war
between himself & his taxable identity.

8 This Amount is Payable by…
His father’s masterwork, My Brother Jack, cemented
our 20th century milieu. It seemed in every generation,
one either went off to war or wrote & was poo-pooed.
But in this modern sequence number, where intellects
have fallen, what happens to those ‘hobbyists’ who glue
words – end up fixed in some ATO novel scattergorie?
E ‘New’ Holland, Deputy Commissioner of Taxation 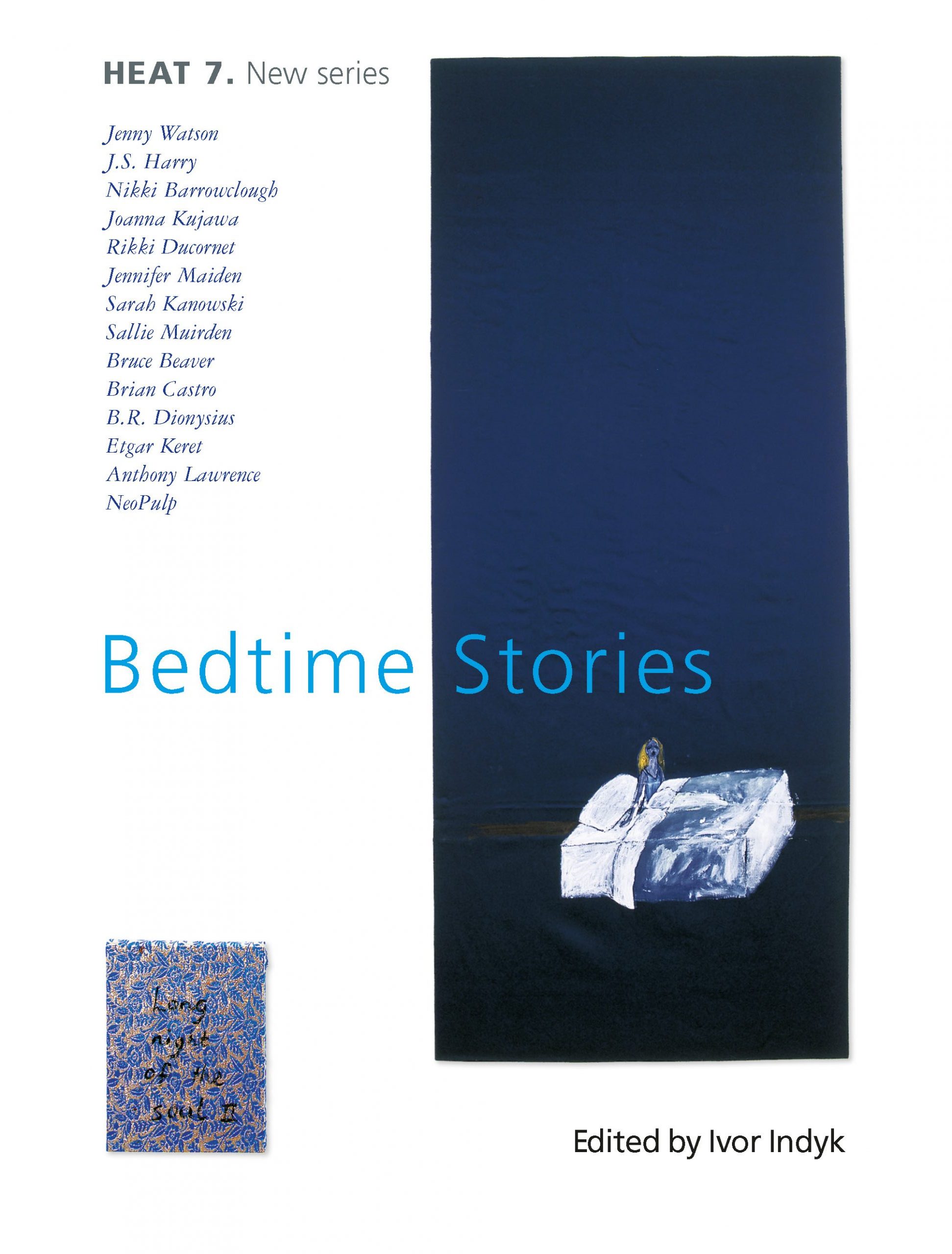