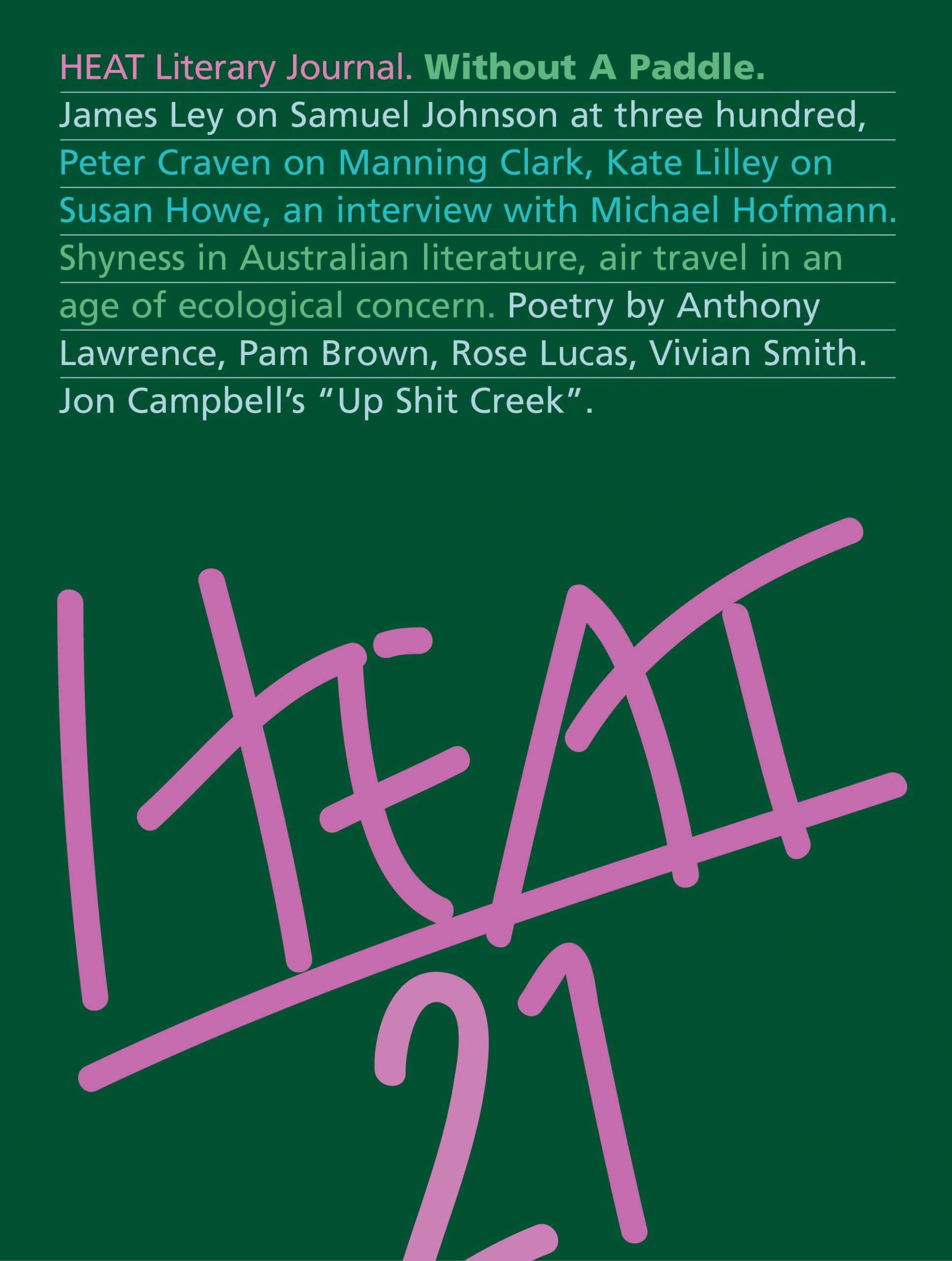 HEAT 21. Without a paddle

This is HEAT’s summer 2009-2010 edition, with a range of essays on literary topics, beginning with James Ley’s portrait of the great Samuel Johnson, on the occasion of his three hundredth birthday, so awkward in his personal life, so balanced in his moral judgements and his prose. Closer to home, Peter Craven, whose own orotund utterances have the flavour of Dr Johnson’s, reflects on Brian Matthews’ biography of Manning Clark. Poet and critic Kate Lilley, daughter of Dorothy Hewett, writes on the importance of filiation and inheritance in the American poet Susan Howe, herself the descendant of a distinguished line of writers. There is an interview with Michael Hofmann, renowned for his translations of Franz Kafka, Bertolt Brecht, Patrick Süskind and the novels of his father Gert Hofmann; while Josiane Behmoiras, en route to interview the priest of speed, Paul Virilio, in Paris, reflects on the wisdom of travel by air in an age of ecological concern. Saskia Beudel writes of the contemplative appreciation of landscape handed down through her family, both Australian and Dutch. In fiction, there are new stories by Brian Castro, displaying the virtuosity and wit in the handling of anxiety evident in his recently published novel The Bath Fugues, Linden Hyatt on the consequences of bereavement, Ronnie Scott on sex and smoking, and Luke Carman on the complications of social intercourse. There are new poems by Anthony Lawrence, Rose Lucas, Vivian Smith, Joanne Burns, Fay Zwicky, Ken Bolton, John Mateer, Pam Brown and more, and paintings by Melbourne artist Jon Campbell based on popular sayings like ‘Schnitz and Titz’, ‘Weak as Piss’ and the expression from which this issue draws its title, ‘Up Shit Creek…’

Kate Lilley – Blackwork: On Susan’s Howe’s The Midnight
Jena Woodhouse – Michael Hofmann, Poetry and Translation
Peter Craven – The Gospel According to Brian
Saskia Beudel – City of Skies
Josiane Behmoiras – A Flight of Fancy: Virilio on the Move
James Ley – A Degree of Insanity: On Samuel Johnson