Julie Rose is a freelance translator whose translations range from Paul Virilio and Jacques Ranciere to Racine and Alexandre Dumas. Her most recent translations include Andre Gorz’s Letter to D., and Victor Hugo’s Les Misérables. She is a winner of the PEN medallion and lives in Sydney. 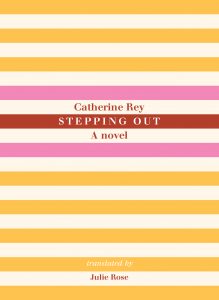 The new novel by French-Australian author Catherine Rey opens in provincial France in the 1970s, with the eighteen-year-old protagonist, dressed in borrowed platform shoes and a cape, her possessions in a plastic bag, abandoning her home and schooling, to move in with her lover Marco.